We received the physical product of the Family Four-Pack of The Cat of Bubastes from Heirloom Audio Productions.

There is nothing like reading a good book. It gets even better when you have someone else to read it to you. And even better than that, is having a star cast of actors who bring that story to life through an audio drama. That is what you get with The Cat of Bubastes from Heirloom Audio Productions.

Heirloom Audio Productions has made its mark by producing quality audio-dramas that capture the imagination of audiences spanning a large age range; six to adult. The stories they tell are educational and the performances are entertaining with, really, never a dull moment. They have the ability to bring the vision of the story to life through the voices you hear while listening to the story.

This time around, Heirloom brings the listener the story, The Cat of Bubastes. The collective performances of the cast for this production contribute to making this “radio drama” really fun to listen to. Your children and you may be unfamiliar with the story, but I bet you that some of the voices behind the characters are ones you know. Brian Blessed (Star Wards, Tarzan and 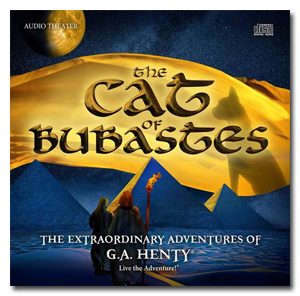 Robin Hood), Russell Boulter (Ben Hur), Elizabeth Counsell (The Chronicles of Narnia), Anthony Daniels (Star Wars), Sylvester McCoy (Dr. Who and The Hobbit) and John Rhys-Davies (Lord of the Rings and Indiana Jones). Do any of those people sound familiar? Wait until you hear the voices and maybe that will jog your memory. Heirloom Audio Productions may eventually do to audio drama what animated film has managed to do; draw in the big stars for their productions.

Heirloom Audio Productions has put together an audio drama of The Cat of Bubastes, which takes its listeners along the way for a couple of hours of excitement, drama and a whole lot of fun. The audio follows the adventures that children’s literature novelist George Alfred (G.A.) Henty wrote about in his novel of the same title that was published in 1889.

The Cat of Bubastes is a two hour long production that is geared to listeners ages six and older, which is the age range of most of its audio dramas. Many of Henty’s books have main characters that are male and face some sort of challenge. In this story, listeners follow the life of Prince Amuba, who is captured (along with his charioteer, Jethro) after his father, King Rebu, is killed in battle. Amuba is taken to Thebes, where he becomes the servant of Chebron, the son of a high priest of Osiris. The two boys become friends and eventually are involved in a mystery when they learn of a murder conspiracy in the priesthood. The story is already exciting and the revelation just intensifies the energy of the story. The actors do an excellent job of keeping the interest throughout the story.

I would love to say we took our time over days to listen to the story, but no. As usual with Heirloom Audio Productions CDs in the past, once the package arrived, it was opened and my children sat and listened to the story from beginning to end in one sitting. Yep! They are that entertaining. 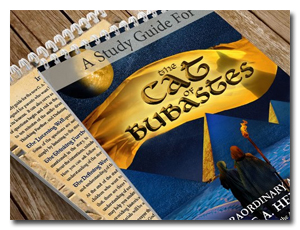 There is an instance where Amuba and Chebron accidently contribute to the death of cat, which just so happened to be the successor of The Cat of Bubastes. My children have a cat that is just as cherished, so they understood the real tragedy of that situation.

Along with the two CDs, the Family Four-Pack includes:

Read more about the Family Four-Pack.

We did read through the study guide, which is great for reviewing the material. It includes study questions from the story that will help children understand the story, some vocabulary that may be challenging to younger listeners and help with further discussion past listening to the audio.

My children love audio-dramas and I am so glad they do. Audio-dramas (and audio-books) require concentration and attention and sometimes a good imagination to make the story truly come to life.

PRICE AND AVAILABILITY
The Family Four-Pack of The Cat of Bubastes is a value of $279.80, but may be purchased for $99.97. You may also purchase the two-CD set for only $29.97. There are other purchasing options you may prefer. They even offer a 90-day money back guarantee. You cannot beat that!