I had the opportunity to review the 102 minute DVD documentary film IndoctriNation that is produced by Great Commission Films. 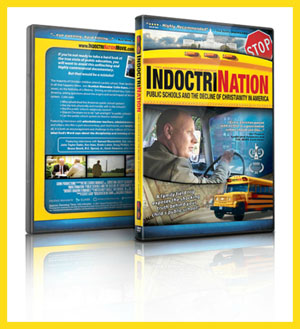 Joaquin Fernandez and The Gunn Brothers have brought to screen the film IndoctriNation: Public Schools and the Decline of Christianity in America. Although the film could be deemed pro-homeschooling, I found it to be more about our children and the influences they are presented to everyday as they are shuttled off to school away from home in a big yellow school bus.

Colin Gunn provides narration for the film. Gunn is a Scotland native, homeschooling father of eight children, who now lives in Waco, Texas.

At the time the move was made, Dunn purchased a big yellow school bus, which is a universally recognized symbol of public school, and drove across the United States with his wife (Emily) and their seven children. During this period, the Gunns interview a number of people – administrators, former students, parents, teachers and theologians.

The audience is not presented a glossed perspective of the public school system, but instead the reality of it and what it has become over the years. A young Christian student whose parents opted her out of the lessons on homosexuality and AIDs was still introduced to both topics by her classmates throughout the course of school.

Students are not just presented reading, writing and math anymore while at school, but also must manage through many social issues like sexual sin, abortion, drugs and alcohol and violence while being forced to leave their Christian values at the school door.

See LaVerdiere discuss the challenges she faced as a Christian teacher in the public school system.

IndoctriNation goes on to show how the debate of whether or not Christians should allow their children to attend public school is a point of contention with major leaders in the Christian community. The heated topic is not one that only exists within our private communities where we live.

There are prominent people on both ends of the spectrum. Albert Mohler, President of the Southern Baptist Theological Seminary in Kentucky promotes “teach your children” and believes Christians should have an exit strategy from the public school system. On the other side, Franklin Graham believes at least one trained child witness should be in every public school classroom. Graham said Christians should not surrender, but “take back” public schools.

Whether you decide to homeschool or send your child to a school away from home, as a parent, Indoctrination is a film you should watch. Gunn and Fernandez provide a keen perspective into the current state of public schools. There is no need for embellishment of the scenarios shared in the movie, as they are stating fact. I do realize that all public, private and away from home school settings do not have detrimental effects on children, but many do. Your children should not have to spend their school day defending the values you teach them at home, while also trying to obtain an education.

As Gunn says, our children have “impressionable minds.” Given the choice, I would like to be the one who does most of the impressing on the minds of my children. Another comment made in the movie is “the raising of the character of our children is not the responsibility of the schools.” I believe my children will be better witnesses after they have a solid foundation in their faith and have learned how to witness rather than learning on the battle field.

I do agree that homeschooling is a personal choice and it is not right for every family. A decision all Christian parents must make, according to Gunn is whether or not to “protect them (our children) from public schools or leave our children in the system to influence for the better.”

IndoctriNation presents great perspective on a heated subject that may always be a point of contention for Christian parents. This is a wonderful film to show for a group discussion, but I would highly suggest it be for a more mature audience due to the nature of some of the issues presented in the movie. Prescreen the movie before sharing with your older children.

IndoctriNation is also available in Spanish and will later have versions in Chinese, Korean and Russian.

PRICE AND AVAILABILITY
IndoctriNation: Public Schools and the Decline of Christianity in America is available on DVD for $19.95. There is also an IndoctriNation book ($14.95) and you may purchase the bundle (DVD and Colin Gunn autographed book) for $24.95.

You can read more reviews of this item by fellow crew members.