We had the opportunity to review a physical CD of For The Temple, a new audio drama from Heirloom Audio.

Heirloom Audio dramas have brought an enjoyable twist to learning history and entertainment in our school and lives. With a vision of “helping parents inculcate biblical worldview to their children,” I think they have done a great job. We have had previous opportunities to review audio dramas from Heirloom Audio that include St. Bartholomew’s Eve, Wulf the Saxon and you may read more of my reviews of others.

In the “good old days”, radio drama was a gathering time for families to sit together after a meal and listen to audio theater. Good wholesome stories were heard, and adventure and excitement was experienced. Imaginations ran wild as the voices that told the stories brought the characters to life and listeners climbed through the radio and into the action. That is just what you get when you listen to an Heirloom Audio production. You also get great Christian radio theatre. 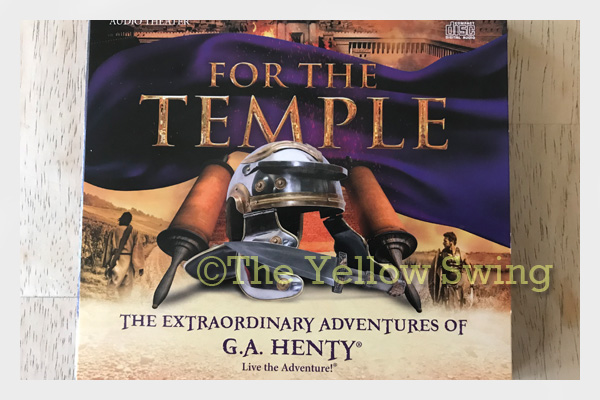 This CD case is an invitation to excitement. Typically, when we receive an audio drama from Heirloom, I see the case for one moment before my children grab it and head off to listen to the story.

Many of the voices you hear playing the characters are people who your children (and you) may be familiar with from other movies and television shows. Brian Blessed (Star Wars, Tarzan and King Lear), Chris Larkin (Master and Commander Valkyrie) and Cathy Sara (Downton Abbey) are just a few of the actors you hear.

This time around, before mu children started listening to the story, I stopped them because I wanted to read through the study guide together. The study guide comes as a download along with the CD set. 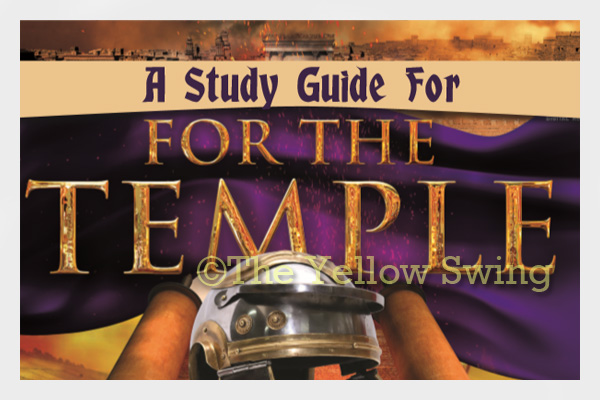 Each audio drama comes with a study guide to enhance the learning. Your children can easily listen to the CD alone and learn something, but the study guide Is extremely helpful. Many of the pieces of history Heirloom presents are not typically found in regular history books. That is one of the reasons I love them. I also learn of more about historical events that get overlooked or ignored in the history I learned while growing up or that we now study.

Listeners are welcome to journey along as the storytelling of G.A. Henty’s For The Temple is shared. The audio drama is taken from the original story, For the Temple: A Tale of the Fall of Jerusalem, which was written by G.A. Henty in 1888.

We meet John of Gamala (a Jew) and his fiancée Mary. John’s biggest concerns in life are keeping up with his spontaneous fiancé and his future of taking over his father’s farm. It’s actually Mary’s action that sets the story in motion after the two are caught in a boat during a storm at sea. John and Mary are rescued by Josephus (and his crew) who mistakes them for siblings. Never does John deny that assumption. After getting to know Josephus and about the Jewish war against the Romans, John knows he has a higher calling (than marriage and maintaining a farm) and knows his destiny is as a soldier in the war against the Romans.

John is only 16 years old at the time, but his devotion to his people and the cause is stronger than his consideration of self and personal goals. He is wise beyond his years and becomes an integral part of the battle against the Romans. Over the course of the story, John proves himself worthy of his position in the war as he becomes a leader over men older than he. One example of his leadership is at the beginning of the war when he fools the Romans into believing their original band of soldiers of 20 is many more men. The soldiers John eventually comes to lead becomes more 400 (unmarried and committed to the cause).

Although John returns to his family several times during the war, he leaves them, and Mary, again to continue as a soldier. There was a funny scene when John returns home and everyone is raving about “that John”, strong leader of the war, savior of the people, etc. None of his family realizes that he is “that John”, but it is eventually revealed. For those romantics, you will be happy with the John and Mary story.

We get to see John continue to grow in character through other experiences. He learns to accept, “a sad fact of war is defeat.” He also see his goal of saving the temple threatened by “war within his own army of men.” Although he is unable to achieve his goal, we get to see God’s will be done with the vow that John and Titus make to each other. Destruction comes, but a life is given to God.

The study guide can be a great resource to use with children in elementary through high school grades. Each chapter of the story includes: Listening Well, Thinking Further and Defining Words sections, which have questions for listeners to give verbal or written responses. They also help guide the story and keep the listener clued into the progress of the story. For The Temple is non-stop action and I have to admit, I had to ask, every once in a while, “who is talking” or “what just happened?”

Although I don’t agree with Henty’s views of black people at that time period (who knows if he would feel the same way today), I do like the character of the boys in the stories he wrote. Henty shows young boys making great accomplishments in life. Self is not priority. Henty introduces another character, Jonas, who partners with John and becomes an asset to the battle. I love the Christian values that are shared and the way he portrays young boys.

PRICE AND AVAILABILITY
You may purchase For The Temple. Also, join the adventures of the Live The Adventure Club!