We had the opportunity to review a physical CD set of the Wulf the Saxon Single Pack from Heirloom Audio Productions.

I have grown to appreciate audio dramas. That came from the opportunities I had reviewing audio dramas from Heirloom Audio Productions, in the past. Since that time, its catalog of radio theatre has grown to include titles like With Lee in Virginia, Under Drake’s Flag, In the Reign of Terror and Captain Bayley’s Heir {see all audio adventures}. Wulf the Saxon is the latest release from Heirloom Audio Productions, which we had the opportunity to review. 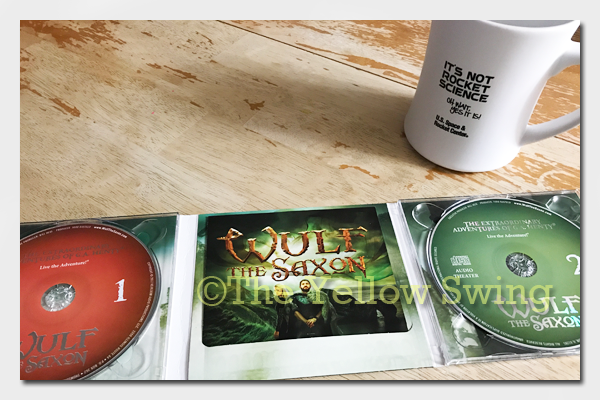 Wulf the Saxon comes as a two CD set and is geared towards children, ages six through 16, but older children (even adults) may find themselves sitting close to the CD player/computer in expectation of what will happen next in the story. There is an insert (shown in the middle) that lists other adventures you may purchase. Also included on the case is a list of the cast, which I frequently referred to while listening to the audio drama.

Many of the protagonists in G.A. Henty’s writings are young men or boys and in Wulf the Saxon, it is no different. Wulf the Saxon opens with two young brothers who are arguing. The minor disagreement is resolved by the narrator (Brian Blessed as G.A. Henty). That sets the tone for a story that includes brotherly conflict, but the brothers are not the focus of the audio drama. The narrator introduces listeners to Wulf the Saxon. Wulf, a young page to The Saxon Harold, Earl of Wessex, is 16 years old and being groomed to follow in the footsteps of his father, to become an earl. His behavior is a typical reflective of his age as we hear when Harold disciplines Wulf regarding a recent event.

“You spoke as a quarrelsome boy, not as a page who carries the weight of the kingdom on his shoulders.”

“It is not always good to let those know what we think. Many will believe your words echo my thoughts.”

Instead of owning up to his behavior, Wulf adamantly tries to defend himself. His behavior results in Harold commanding Wulf to return to Steyning (Wulf’s home), so he will learn the significance of his position and be better prepared for the responsibilities he will soon have as an earl. It is thought that time spent among the people he will one day rule over will also help him grow in his maturity.

We immediately understand the magnitude of Wulf’s position and the importance of his personal character. This opened the opportunity for one of the many discussions I had with my children about character, while listening to the story. One is that our opinion matters, but our thoughts should be well considered before sharing them with others. Everything one thinks does not need to be said. It is the mature one who can hold his tongue even when they are wronged. Wulf represents more than himself, he represents a kingdom. After his return from Steyning, Wulf is a wiser man and ready for his new position.

Good character is always stressed in Henty’s stories and we see that in many of the people we meet in Wulf the Saxon.

Wulf steps into the role of confidant and protector of Harold and a leader of his people as a landholder. We see a young man on the front lines of battle leading men against the Welsh and the Normans, but see his respect and obedience for those he serves. We also get a glimpse into his personal life when he meets Lady Agnes de Burg. Although there is an attraction, Wulf’s commitment to the kingdom takes precedence over his personal affairs.

“Revel in thy youth, by God’s grace the day will come for a spouse,” said wise Harold who is not able to marry the women he loves, because she is a commoner. As king, marriage for him will not be for love.

“There may only be one in a thousand who marries for love,” said Harold.

Marriage is for power and to create peace. 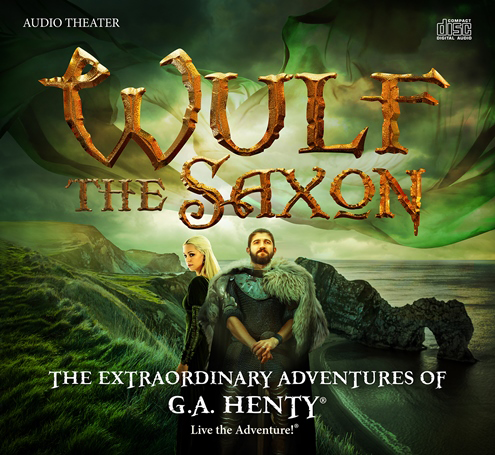 I have mentioned in the past that I have a difficult time with audio dramas or books on tape; my mind wanders. When listening to Heirloom Audio Productions that has not been my experience. The variety of actors bringing the characters to life (as opposed to a single reader of a book/story or book on tape/CD) helped keep me engaged in the story. I did have to listen to it more than once, because I kept getting the voices confused, but that is just me. Also, there were some scenes that were more intense than others that kept our ears open. Some of those scenes include when the ship is floundering in the waters and as the surviving men struggle to shore. Another was when Wulf and the men are taking the Welsh castle and the battle that ensues once the Welsh enter the castle through a secret passage way.

Although there are no visuals, there are a couple of places that could be disturbing to younger children, because the storytelling is so good and graphic. Two instances are when two of the characters lose an arm as a result of battle.

The Saxon Harold, Earl of Wessex is a wonderful example of a Christian man and one from whom Wulf learns a lot. Harold is tricked into swearing loyalty to the Duke William of Normandy. Instead of protesting, Harold honors his words and the commitment he made.

“Do not refuse benefits, because you do not like the hands that grown them.”

Take the benefit and use it to benefit others and/or improve yourself.

One of the things I think make audio theatre from Heirloom so engaging is the level of acting skill of the people who are cast in its productions. Some of the notable actors in Wulf the Saxon include Brian Blessed, Jack Farthing, Helen George, Patrick Godfrey, Chris Larkin and Sian Phillis. All of them are professional actors, but most importantly have training and experience on the stage. My personal opinion is stage actors have a skill, unlike a movie actor. Often, there are no special effects, etc. on the stage. Real acting is required. In Wulf the Saxon, real acting is what you get! Spending a couple of hours listening to Wulf the Saxon with a cup of chai tea was a wonderful way for me to enjoy the evening.

The Wulf the Saxon CD set is so new that the bonus material, which includes the study guide, is not yet available. Another great resource teacher resource from Heirloom Audio Productions is the Live the Adventure Club, which helps parents “bring Christian history to life” to their children through activities, articles and news. Check it out!

PRICE AND AVAILABILITY
Wulf the Saxon is available as a physical CD for $29.97, which also gives you instant access to the MP3 download.

You may learn more about Heirloom Audio Productions and Wulf the Saxon: