We had the opportunity to review the Season 6: Underground Rising, Digital version from Brinkman Adventures.

And they are back! The Brinkman family and I am only one season behind; the last one we listened to was season four. Well, you know what? That is all right. You can start listening to the series starting with any season. The latest is Season 6: Underground Rising and just like the other seasons it has interesting characters, a lot of action and riveting stories you cannot stop listening to until the end.

This time around in season six, there are not as many episodes, but the stories are still engaging and just what we have come to expect from Brinkman Adventures. We travel to

I could not stop thinking about the many people who were threatened by the Nazis during World War II. Although Reng and Lynn were not Jewish, as Dutch people, they were still affected by Hitler’s wrath. They had the freedom that Jews did not and had to make a decision to ignore the injustice or step up and fight for those who were being abused. I would have wanted to help people, but I wonder if I would have been as brave as Reng, Lynn and their peers.

There was some humor mixed into episodes that lightened the seriousness (and danger) of the situation like when Reng and Lynn helped their friends “steal” ration cards while in church and when the Gestapo later comes to their home looking for Reng. He goes into hiding and the guards arrest Lynn, who is pregnant at the time. Because Lynn is narrating the story, we know she makes it out alive, but not everyone in her situation did. River and Lily know about the reign of Hitler, but Canyon is new to the history. The episodes were great prompts for more discussion on the subject.

The romance between the Leng and Lynn was sweet. Despite all of the ugliness that was occurring around them, people did continue with their lives. The real Reng and Lynn ended up having 10 children.

I love the Real Stories section that is on the website. They have Real Stories for each of the seasons of the Brinkman Adventures. We are going to again listen to the other seasons we already have and follow up with this section. Real Stories gives more background and detail about the people we meet in the adventures. Seeing the pictures of the people make the stories more personal and well, real. Although most of what you read in the Real Stories section is included in the episodes, listening to the occurrences in the audio drama are so powerful. Also, the section has more content to compliment the themes of the episodes and continued our learning experience. I would suggest listening to the episodes first and then reading through the Real Stories. After that, you will probably want to listen to the audio dramas again. 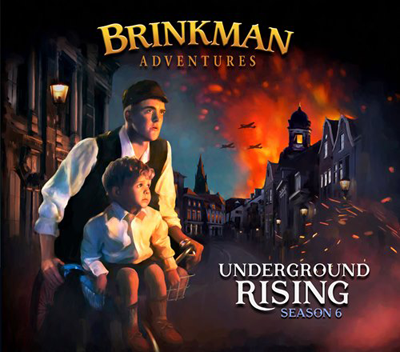 Some quick highlights from the other episodes:
Twice Born Fly

Charlie was so adorable and his joy when he accepts Jesus Christ as his personal savior is beautiful.

The dream that Jack recounts to his family (I knew it was a dream 😉 ) was fun. If we just say “yes”, we would all have a friend who will lead us away from captivity and into freedom.

I Wonder Why touched my heart in many ways. I appreciate the parents’ desire to serve as missionaries in India. It was not something all of the family wanted to do as we see with their daughter Sam. She is sad about leaving her friends and is not sympathetic to the cause. It is so encouraging to see how God touches the hearts of the children in the orphanage as well as Sam. Because they go to India, several children become saved.

I was also reminded that miracles do happen just as it did for here brother Huck, who was hospitalized with a life-threatening condition. My community is currently praying for one of our own who recently went abroad as a missionary and is fighting for her life in a foreign hospital.

Some of the episodes come with a suggestion for listeners to be 10 years old or older. Even if your children are over 10, I suggest you listen to the season with them. The Brinkman Adventures episodes will prompt great conversations between you and your children.

The reoccurring theme in the Brinkman Adventures is to follow God and his lead. Wherever we go and whatever he calls us to do, He will always be with us.

Although we enjoyed the six episodes in the season, we do miss the original format of five hours of episodes. We really like audio dramas and love Brinkman Adventures. We have been known to listen to one season in the same sitting, so that amount of time is not too long for us.

I really appreciate the effort the Bultman has put into the ministry of the Brinkman Adventures. I have a daughter who may eventually go abroad to do mission work. It has been her passion for many years. The episodes we have listened to have taken us around the world and given us great insight into life as a missionary. They have also reminded us to, “seek first His kingdom and He will take care of the rest.”

For the real radio experience, check out on what radio stations across country (and one international) you can hear the Brinkman Adventures.

PRICE AND AVAILABILITY
Season 6: Underground Rising, Digital version is available for $19.99 as a digital download and instant access. You may save ten percent on your purchase for a limited time.