I have previously “traveled” with Dave Stotts through history (and didn’t want to return home) and this time around was just as exciting as the many other times. Dave does not just teach you about history, he takes you there (up close and personal). 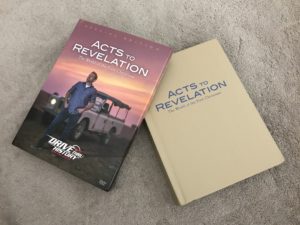 The places you get to go to and see are amazing! He travels where needed to make sure you obtain a great grasp of the history he is teaching. I cannot imagine his travel budget. Many of the places are ones I will never travel to, but still get to “be there” even if only in the episodes.

For this Drive Thru History® experience, Dave uses the book of Acts to walk (drive) us through the beginning of time and introduces us to the first Christians. The journey begins in Jerusalem and finishes in Patmos. We meet Paul and Peter who were instrumental in sharing the Word of God and the promotion of Christianity. The history Dave shares is nothing new. If you crack open your Bible, the same information can be found in those pages. What makes this journey through Biblical history so special is that Dave takes us to the same places (most of them) where the history took place. We walk on the same roads, through the same buildings and cover territory that those men traveled. The sights we see in Drive Thru History® “Acts to Revelation” are better than watching a regular movie. It has action, comedy, murder/execution and mystery.

WHAT YOU GET
The DVD set comes in a glossy sleeve cover over a hard-case covered book that includes a summary of each episode, discussion questions and the answers to those questions. There are 18 episodes, each with chapters.

HOW WE USED IT
I originally requested to review Drive Thru History® “Acts to Revelation” to use with Canyon, but that was short lived. Everyone wanted to take the drive through history and I am glad they did. We covered two episodes a week. Before we watched the lesson, I read through the summary with my children, so we would know what to expect before watching the DVD. After we watched the episode, we got into some great discussions that went beyond the discussion questions in the study.

I really enjoyed this study. I learned more about the experiences Paul and Peter had as they persevered in the sharing of the Gospel. One of my children has been studying about the beginnings of Christianity, so they really enjoyed this study. Both men experienced persecution, but that did not sway them from their mission of sharing the Gospel. Ultimately both paid the price with their lives when they were executed by King Nero. All three of my children shared their thoughts regarding how far they would go in defense of their faith. Not only did Paul and Peter travel great distances with no comfort or ease, they never lost vision of their mission.

Some instances (there were many) where God showed his hand was while Paul was in Rome, During that time, he was under house arrest. Normally, he preached in open spaces where he was not held captive. Despite that, church leaders came to him. Since Paul was heavily guarded by Roman soldiers, no harm came to him and he was not able to be run out of town when some of the Jewish leaders did not agree with his preaching. Also, during this time, he was able to pen letters that later appeared in Ephesians, Philippians, Colossians and Philemon.

This may not be right, but I really love Dave’s humor, a lot! Of course, he had a way of easing in a few jokes.

Some that made me laugh were when he boarded a ship to Patmos, the one time he was not driving a car, he hung out with the captain of the ship. Dave tried to steer and the captain quickly slapped Dave’s hand. He found he was not much help on the boat, but we got to see his cool dance moves and a rendition of Titanic. After he got sea sick, I think he needs to stick to driving cars.

He also introduced us to a throat singer named Boaz.

Cars . . . Canyon loves cars and loves to see Dave driving the variety he does. Two we saw we are Volskwagon Beetle and a vintage Alfa Romeo convertible named Bella.

One downfall I have found with all Drive Thru History® studies is Dave makes what you are learning so interesting that you do not want to stop the video to answer questions or have a discussion. There were several times I had to stop the lessons, so we could complete the offline material and I was met with wide eyes and sadness. We love watching the episodes so much and hate to stop along the way.