Abortion has been a hot topic in the news recently. Most people are on one side, pro-abortion, or the other, pro-life. Author Joel Ohman is pro-life! Because of his stance on abortion, Ohman wrote Other Bodies, which we had the opportunity to review. 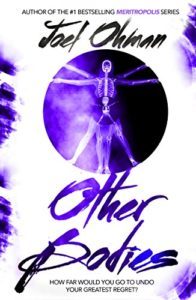 “ I’ve written a book to change people’s minds about abortion, to cause them to stop and think, to feel, to maybe see the world through new eyes. Other Bodies is a powerful Young Adult fiction book that tells this story in an accessible and exciting way.” ~ Joel Ohman

But, considering the topic, abortion, it is not an easy issue to address.

Author’s Notes
“I didn’t want to write this book. I fought it, but the idea kept growing inside of me, and it wouldn’t leave me alone. It was a crazy idea, really. But, when I tried to sleep, it whispered to me. When I tried to write something else, it tugged on the peripheries of my consciousness, daring me to look it in the eye. If I were to do so, I knew what it would mean though. Career suicide, most likely. Too controversial. Too ambitious. Delusional, really. Read more . . . ”

Some of the Story:
“Welcome to Hattie Martins’ dystopian Philadelphia, where everything is not as it seems…

Just as her life is looking up–a new job, new friends, a new date–Hattie discovers not all progress in her beloved, futuristic Philadelphia is for the best. Societal regrets can become personal regrets in an instant. Choices don’t always come with second chances, and when they do the cost can be unimaginable. How far will she go to undo her greatest regret? And worse yet, what will she become if it’s too late? ”

Lily, who is a teenager, has been reading Other Bodies and literally has not been able to put the book down. I have heard her make comments along the way while turning the pages. She shared some comments about the story:

“Other Bodies captivates the reader at first sentence. It follows the story of Hattie, a 16-year-old girl living in futuristic Philadelphia, Pennsylvania. After the death of her grandfather, she is alone and broke. Hattie gets a lucky break when she finds a job at an abortion clinic.

The book is a page turner that is almost impossible to put down. The story is painted with so much vividness, you feel like you’re walking the streets of Philly with Hattie.” ~ Lily

Abortion is not an easy subject to discuss, but one parents should address with their teenagers. Ohman makes it easy with his vision of how the future will be if we allow abortions to continue. In Hattie Martins’ dystopian Philadelphia, bots dominate, “reality” is questionable, humans are devalued, abortions are easy and babies have more value as fetuses than they do as living human beings. Some of those instances sound a bit like how babies are now viewed.

With a new personal discovery about herself, Hattie makes a life-changing decision. The readers are left on the edge of their seats (ask Lily) as they learn if that decision can be reversed for the better.

I have loved seeing Lily’s excitement as she read through Other Bodies. I think reading about a young girl close to her own age who faces an abortion and the aftermath has really made her think. Lily admitted the story has made her cry and she is pulling for Hattie. Other Bodies has made her more passionate about the pro-life cause.

Joel Ohman has a new fan and Lily will be reading other books by Ohman.